A Snow Storm, Some Tea in a Cave, and more on my Caldera Ti-Tri Keg-H Review

Last weekend our first winter storm of the season was blowing in, so of course I headed for the mountains to experience it! 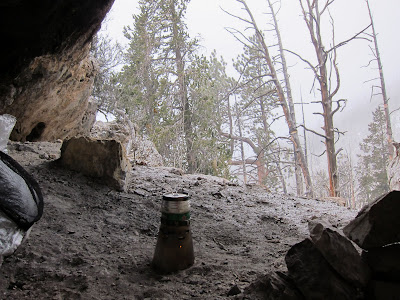 Here is a shot of my Ti-Tri Keg-H in a cave at about 9600 foot elevation and 33 degrees Fahrenheit. Snow  was falling, and the water in my Gatorade bottle was starting to freeze.  I wanted to have some Chamomile tea to warm me up a bit, so I lit an Esbit cube in my Gram Cracker and set my new stove on top of it (with MYOG door in place). While I waited, I enjoyed the sights and sounds of the wind blowing through the trees from the relative calm of my natural shelter.
My water was boiling after 16 minutes, and I added my tea bags. I was surprised that my Esbit actually lasted about 18 minutes in total, which must have something to do with the elevation, cold, or a combination of both I'm guessing because they usually only last 12-14 minutes in my experience. While a 16 minute boil is by no means fast, I was happy that this little stove could boil near freezing water with just 1 Esbit cube. 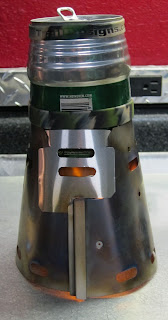 When I got back home, I had an email from Russ at Trail Designs suggesting I add vent holes to the cover I made for the large opening used in wood burning mode. I immediately added two large vent holes and "garage tested" the stove. The vent holes really improved the boil time, which decreased the amount of fuel needed, making the system much more efficient!

This system is definitely viable in both Esbit and wood modes, but it does have its challenges. The cone is sized to nest inside the cone, which I absolutely love, but because of this a lot of the pot and water is outside of the cone, which makes it less efficient. That said, if the cone was taller and did not nest inside the can, I don't think I would even consider it.

Rand did suggest using the pot cozy (that comes with the system) to insulate the top exposed portion of the can, which sounds like a smart idea, but I haven't tried that yet.

So what's next? Well I just received another package with a Yosemite National Park return address...a Caldera Ti-Tri Sidewinder and an Evernew 600ml pot. This system is heavier, but my hope if that it will make up for the increased weight in fuel efficiency. We will see how this new one stacks up! 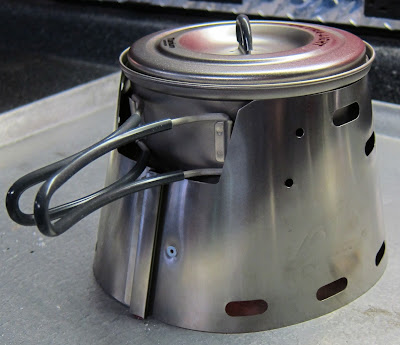