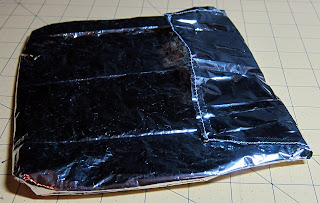 No, SUL does not stand for Super Ugly...this is a crazy idea I've been thinking of for a while now. I was actually laying awake about 3:00am this morning thinking about how I would construct this thing.
For some background, I usually do freezer bag cooking, or FBC, when I backpack. This is where you store your dehydrated meal inside a quart size freezer bag, and all you have to do is add boiling water, stir, wait several minutes for it to rehydrate, then you're ready to eat. In order to keep the contents hot while it's rehydrating or "cooking", most of us have adopted some way to insulate the FBC meal. Some people use an article of clothing for this...
a beanie, the hood from their parka, their quilt. I just don't think it makes sense to get food scents on your clothing, especially in bear country. You will inevitably spill your food at some point. My wife and I have been using cozies we purchased from Trail Cooking with good success (great site...check it out). So why this project? If you have read my posts in the past, then you already know I'm never satisfied with the status quo. My Minimalist Cozy weighs 1.15oz, which is the lightest one I've found on the market, but I have to at least try to do better. 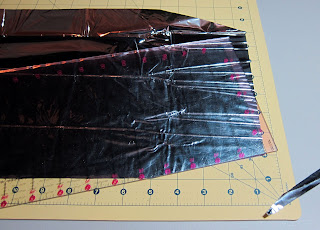 The idea was I could use some sort of reflective material to lock the heat in without the weight of insulation. After a lot of looking around on the internet, I decided to use some material I already had...a emergency blanket. This is by far the lightest option I can think of. Basically what I needed to do was to make an envelope that the FBC meal would fit inside of. The size was to be 8" x 7 1/2" with a 4" flap to fold down and lock the heat in. 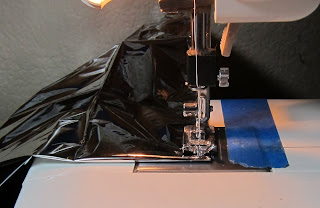 After cutting the material to size and angling one end for the flap, I sewed it together. This material is slippery, i.e. not easy to work with. It's similar to silnylon if you've worked with that, but worse.
Not the most attractive thing I've ever made, but it's a start. I can work on the aesthetics later if it works. 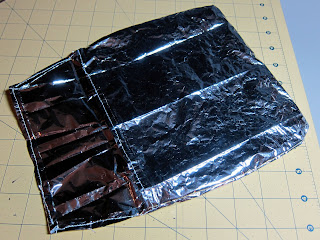 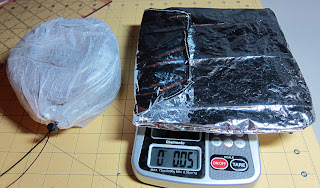 My new "Super UltraLight" cozy weighs a whopping 0.05oz. A success in terms of weight alone... 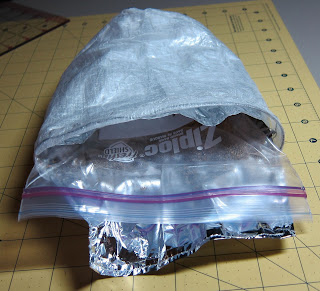 My initial thought was to replace the cuben fiber stuff sack I use to store my pot inside of with a double layered one that has reflective material on the inside. My concern was that moisture would get trapped in between the two layers of water proof fabric through the thread holes, so I decided to keep the layers separate. 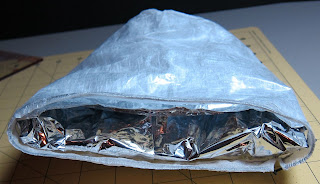 Here's how it works (in theory any way)...you place the cozy inside the stuff sack, then slide the FBC meal inside the cozy and close the flap. 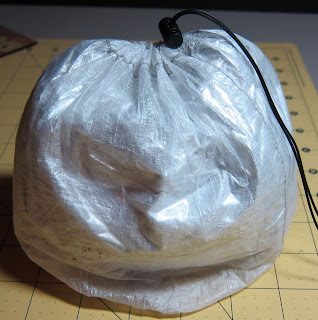 Then close the stuff sack with the draw cord and wait the appropriate time depending on what you're making.

Well that's my idea. The outstanding questions are...

1) Will it keep the heat trapped inside well enough to keep the food hot, even in very cold conditions?

2) Is it going to be durable enough to last a thru-hike? It sure doesn't look like it, but then again it won't get a lot of abuse.

Next steps...do some testing of course! I'll post the results soon!