My wife Jene (aka “Juggy”), her cousin Michael (aka "Golden Boy") and I have wanted to do this trip for quite a while now, since before Golden Boy and his family moved out of the area and up to Seattle. We finally got a few days blocked off on the calendar, and the excitement began. Golden Boy would plan the route, and I was on a mission to help him lighten his load.
Golden Boy had been working on lowering his base weight for quite a while, and was at a respectable 13lbs, but he needed a nudge to get it under 10lbs. There were some easy things I suggested he do, such as repack everything into smaller containers...mini dropper bottles and mini zip top baggies. Trade in the heavy z-rest pad for a 3/8" closed cell foam pad, cut down to torso length of course. Replace the 45oz synthetic sleeping bag with a 25oz down quilt. Lose the dry bag and go with a pack liner. Then I offered to make him a Heineken stove system to replace his heavier titanium pot and wind screen, and also to make him one of my new super tough, 3,000 c.i. cuben fiber backpacks. He loved the ideas.


With all the weight savings, we both decided to try some new TenkaraUSA flyfishing rods. He went with the 11' Iwana and me the 12' Iwana. Our fishing kits total about 6oz including rod, flies and fly box, Tenkara line, tippet spool, nippers for cutting line, pliers for removing hooks, fishing license, and a myog cuben stuff sack with an extra long draw cord so we could hang them around our necks while fishing. 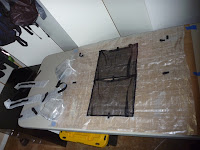 After all the changes, we calculated his base weight would now be less than 10lbs (included the added fishing gear), and I got to making the gear. The stove was fairly straight forward, a myog version of a caldera cone and an Esbit titanium gram weenie, and I enjoyed the beer after cutting the top off with a safety can opener. A cuben stuff sack rounded off the extremely light stove system. Then on to the pack...I had just made my first 4.6 oz cuben about a month before pack (previous versions were silnylon), and I had about 30 miles of testing on it. So far it was wearing very well. The 1.5 oz per square yard cuben fiber material is much tougher than the 1.3 oz silnylon for close to the same weight. For Golden Boy's pack, he would require a hip belt and sternum strap, so the design would be altered slightly. His pack ended up weighing 6oz flat, and I got it done a few days before our departure. Juggy packed our home made freezer bag meals...Couscous with nuts, berries, and powdered milk for breakfast, tortillas, pepperoni, and parmesan cheese lunch, pasta with dehydrated meat sauce dinners, and a selection of Clif and Snickers bars, and we were good to go.
The alarm went off at 3:45am on Friday so we could leave the house by 4:30am for our early flight. A few hours later, Michael picked us up at the Seattle airport, and we headed to his house about an hour away, stopping at Trader Joe's on the way for a few last minute things. We were greeted at the door by 8 month pregnant Yvonne, family hugs and excitement! After carrying our packs and suite case to the spare bedroom, I opened my pack and presented the new backpack, stove, and Tenkara stuff sack to Golden Boy. While he and I were comparing gear and looking at the trail maps, the girls were talking about the new baby and making fun of us boys. Good times!

Day 1 - 9/04/2010 An early Saturday morning and a 4 hour drive, we dropped a car off at the Columbia River Gorge (where we would finish our hike), jumped in with the girls, and headed to Timberline Lodge at Mt. Hood. (This is the hotel that was used in the filming of The Shining.) A cool, breezy, sunny day on the mountain, we said goodbye to little Michael and Yvonne, and hit the trail by around 11:30am with our wind jackets on. 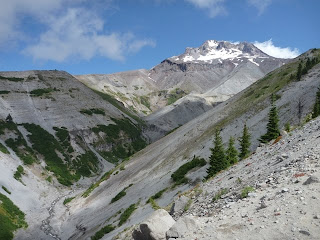 This being Juggy and my first time in the area, we admired the beauty of the mountain and glaciers. The trail was fairly easy, as would be most of our intended route. This was appreciated since we had not trained for this hike, and hence were not in the physical condition Juggy and I were in 5 months prior for our 110 mile PCT section A hike. We talked about the wild life we might see, little black bears, elk, deer, big horn sheep, garter snakes...we hoped to see many at a safe distance. We took our first break overlooking Zigzag gorge, and then made the decent down the steep trail.

We made it over Zigzag River without getting wet, and made the long slow climb up the other side.

The day consisted of beautiful scenery, sunny skies, and all kinds of springs. Living in the desert, this was a real treat for Juggy and me. We had lunch high above Sandy River, with beautiful views of waterfalls and the surrounding mountains.

After lunch we made our way down a beautiful lush valley trail and out into the Sandy River Gorge. 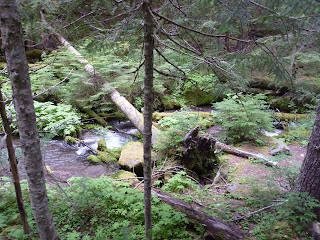 It was getting to be late afternoon with only a few more miles to our planned camping destination. A bear paw print on the trail reminded us we were not alone out here.

We crossed another small creek and started looking for a good place to camp. Another half a mile or so, just before the next creek, we found a great place just a little ways off the trail. We set up camp, cleaned up, and made a good hot dinner. 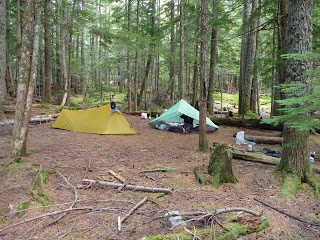 Juggy and Golden Boy had a good laugh at my attempts to get the bear line over an appropriate branch, which I finally did about the time we were losing the natural light. We had a camp fire in the existing pit, which is a feat in an area this wet. The red wine we brought kept us up talking by the fire for a few hours before we finally turned in for the night. Wine? Hey, it was an easy 12 mile first day, with plenty of water around, so why not partake?
Day 2 - 9/05/2010 We slept late in the peaceful rain. After break fast we hit the trail and found a very cool footbridge over the wide rushing creek. 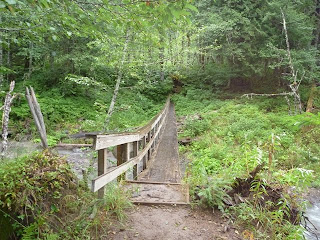 On the other side of the creek we found huge old growth trees and even more lush foliage. 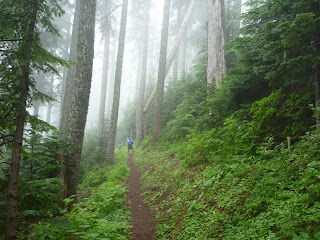 I had accidentally left my glove liners in the pockets of my down parka, which was packed away under our 2 person quilt. Rather than stop and dig for my gloves, I kept exercising my hands on my trekking poles to keep them warm. This worked surprisingly well and my fingers were warmed up in a few minutes.

The off and on rain and kept us cool all day, although the cloud cover blocked our views of the surrounding area. Several elk tracks got us excited that we might spot some, but no such luck. 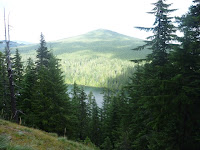 We reached our destination for our second night after walking about 14 miles in the mid afternoon. Lost Lake, approximately 2 miles off the PCT, is nestled in a beautifully wooded valley. 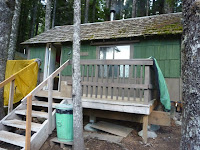 We were all more tired than we should have been, which I attribute to not taking breaks throughout the day like we normally do. We took advantage of the resort with hot showers and a rustic (to put it nicely) cabin with a toasty wood stove in the middle.

Day 3 - 9/06/2010 We awoke at 6:15am to the alarm on my watch. After some coffee and breakfast, we headed to a vantage point near the Lost Lake with Mt. Hood in the distance for some photos. Clouds blocked the top of the mountain, so we'll have to go back some time to nab the perfect shot.
We started the 1 mile walk around the lake around 7:50am, made the 2 mile ascent back to the PCT, and all 3 of us realized how great we were feeling. We ran into some through hikers that had already hiked 2,100 miles on this trail, and were about to get another state behind them the next day as they entered Washington. With 500 miles left this late in the season, they are bound to hit some nasty weather in Washington. Hopefully they are able to finish their quest. 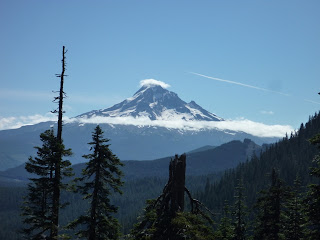 We were diligent in taking a short break and having a small snack about every hour, which kept us feeling energized all day. The weather was nice...cool and partly cloudy. The trees were so dense, we didn't get many views. At one point the view opened up when crossing a lava chute, and Golden Boy and I gasped at the same moment when we caught a glimpse of the now far away, dramatic Mt Hood.

Reaching Whantum Lake in the early afternoon, we had an easy 16 mile day behind us. This is another pristine area, and after we set up camp we had plenty of time to head down to the lake and try out our new Tenkara rods. Golden Boy is a big western fly fisherman, having lived in Oregon for many years with a trout stream running through his property, but Tenkara was brand new to him. I on the other hand had not fished much since my childhood. The afternoon wind brought us with less than optimal conditions for fly fishing, but Golden Boy was able to nab a couple of very small Steelheads before we called it quits.

Back at camp we had another camp fire in an existing pit, and enjoyed the rock chairs with backrests that someone had set up in front of the fire pit. We called it a night early so we could get a good rest for our last day.

Day 4 - 9/07/2010 My alarm went off, and we all laid there for a few minutes. Golden Boy and I let loose a morning flatulent at the exact same time - a very funny way to start the day! We broke camp and it started raining as we were taking our tents down.  (Golden Boy corrected us that this wasn't rain for Oregon) Rain jackets on, we hit the trail right away. The dense vegetation got our legs pretty wet, but the lower elevation kept the air temperature comfortable. We stopped for breakfast about an hour in, which I much prefer than having it at camp. 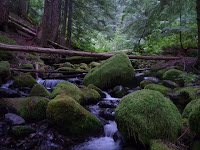 Dropping into the Eagle Creek area, we were a bit overwhelmed by the beauty of all the tropical vegetation, huge waterfalls, and the very cool trail cut right into the side of the rock wall. 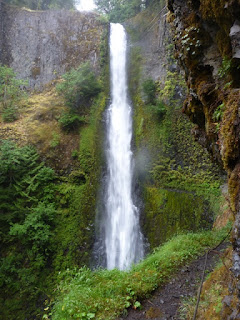 There are cables in some sections to hold on to due to the high exposure, but the trail never really got that narrow to use them. 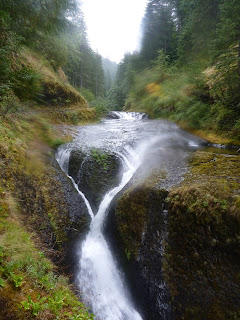 Probably the coolest part was when we rounded an outside corner and caught a glimpse of Tunnel Falls. The trail actually goes through a tunnel behind the huge fall! 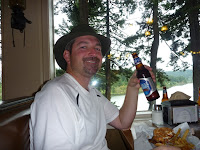 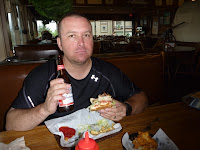 We made it back to the parking lot by about 1:30pm, cleaned up a bit, and then headed to Char Burger for burgers and beer. This wasn't the best food, but there's something about a burger and beer after backpacking that's so good! After lunch, another 4 hour drive back to Seattle.

Yvonne had Elk tacos ready for us when we got there, but first things first...showers. We had a great night of eating, drinking, reminiscing about the trip, and talking about the next one we would do together. Perhaps in Eastern Oregon in the spring? We are already planning a SOBO JMT thru-hike next summer...222 miles in two weeks. I’m ready to go again! 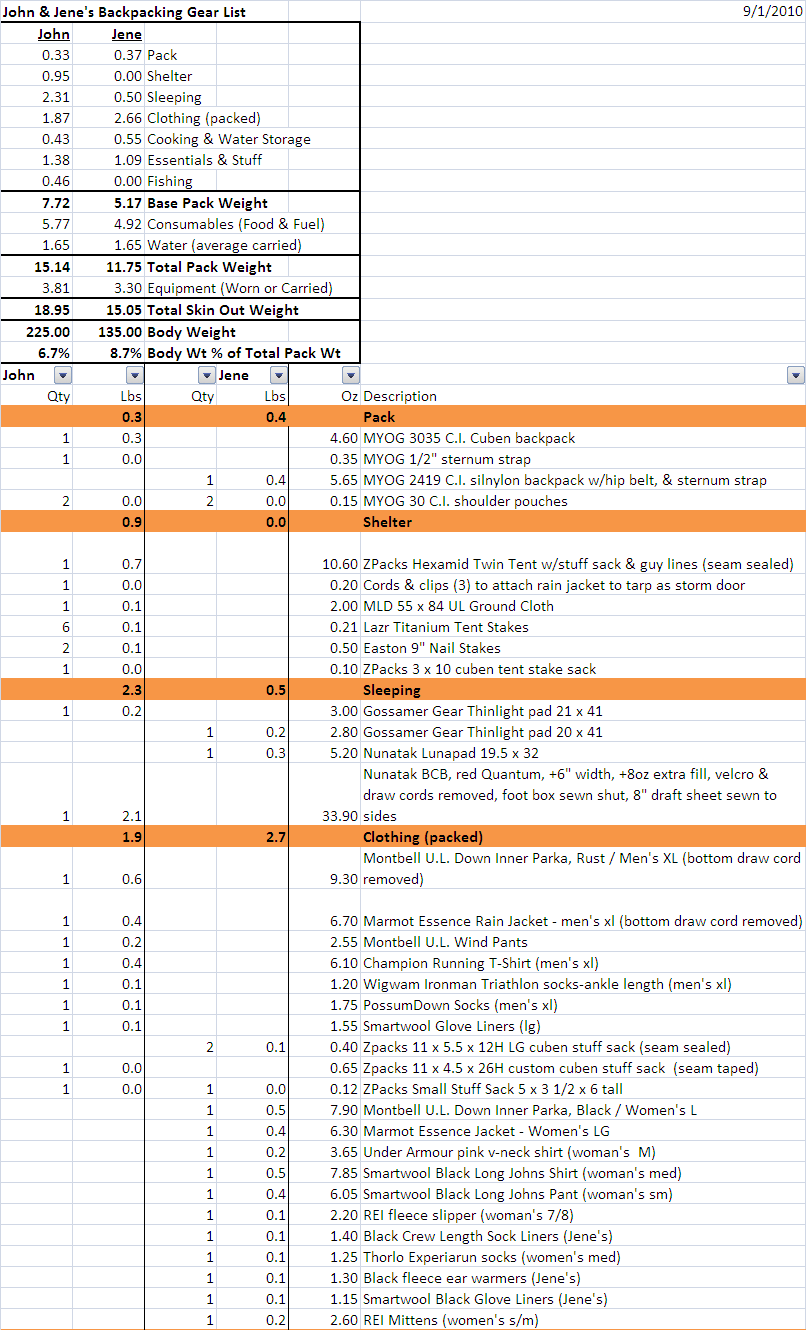 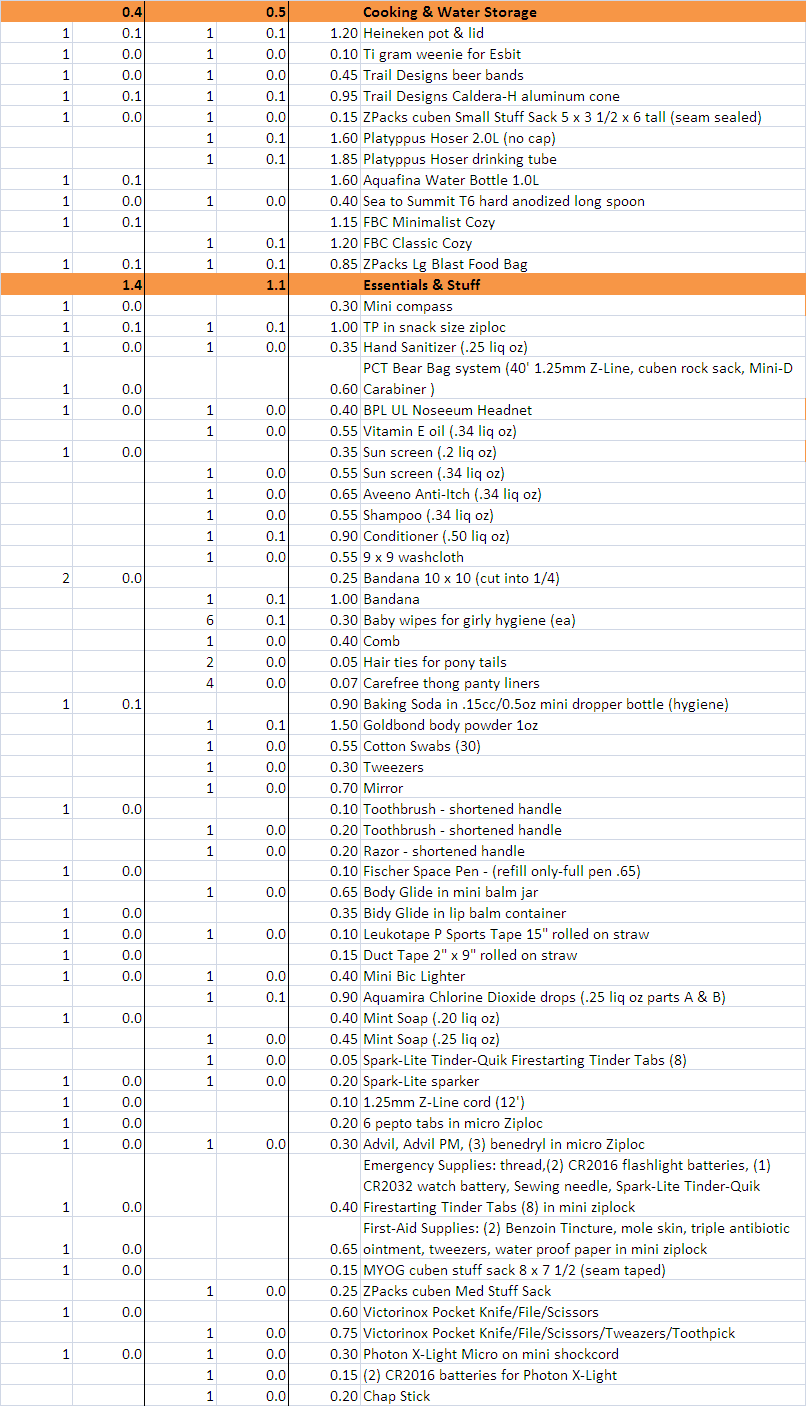 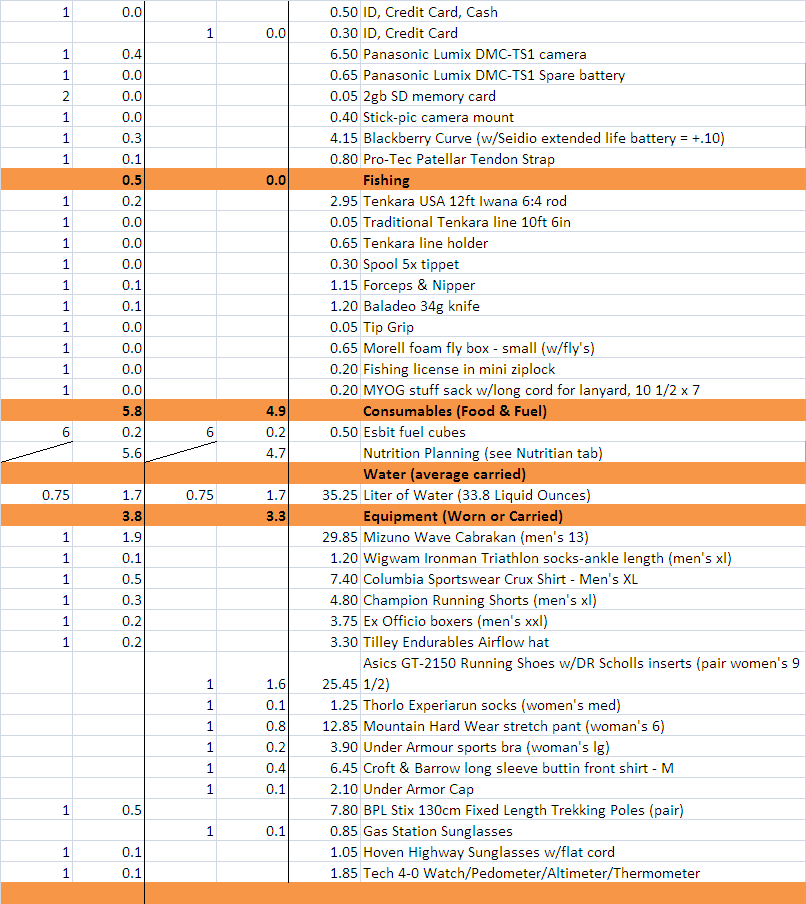